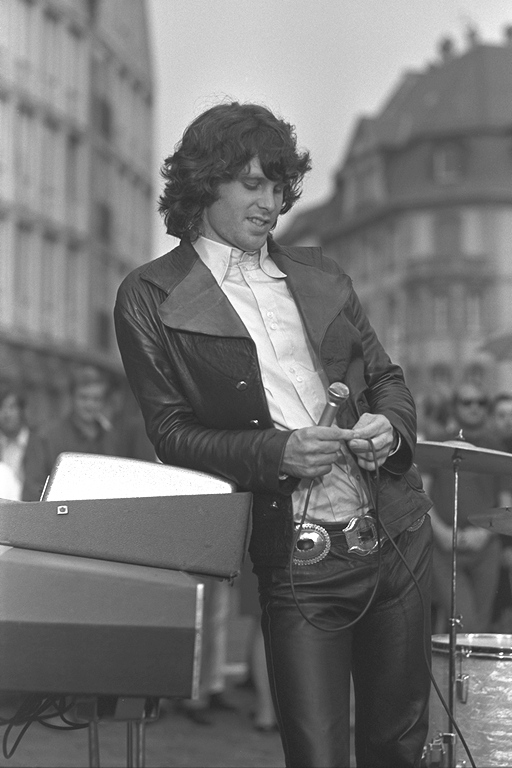 Observations, comments, and pithy remarks excepted from Jim’s book The Lords, printed this spring- about 200 copies for his friends, he says, There will also be a simultaneous private printing of Morrison poems; the fourth Doors album; a screenplay he’s writing in collaboration with poet Michael McClure; a movie he wants to make based on a story he wrote about a hitchhiker turned mass murderer; and whatever plays he writes in the theatre he’s trying to find/rent. (But what has he done lately?)

The appeal of cinema lies in the fear of death.

Strange, fertile correspondences the alchemists sensed in unlikely orders of being. Between men and planets, plants and gestures, words and weather. These disturbing connections: an infant’s cry and the stroke of silk; the whorl of an ear and an appearance of dogs in the yard; a woman’s heard lowered in sleep and the morning dance of cannibals, these are conjunctions which transcend the sterile signal of any “willed” montage. These juxtapositions of objects, sounds, actions, colors, weapons, wounds, and odors shine in an unheard way, impossible ways.

Film is nothing when not an illumination of this chain of being which makes a needle poised in flesh call up explosions in a foreign capital.

Phantasmagoria, magic-lantern shows, spectacles without substance. They achieved complete sensory experiences through noise, incense, lighting, water. There may be a time when we’ll attend Weather Theatres to recall the sensation of rain.

Cinema is most totalitarian of the arts. All energy and sensation is sucked into the skull, a cerebral erection, skull bloated with blood. Caligula wished a single neck for all his subjects that he could behead a kingdom with one blow. Cinema is this transforming agent. The body exists for the snake of the eyes; it becomes a dry stalk to support these two soft insatiable jewels.

Today they doors of all projection booths are made of steel.

Does the theatre keep out light or keep in darkness?

The aim of the happening to take cure boredom, wash the eyes, make child-like reconnections with the stream of life. Its lowest, widest aim is for purgation of perception. This happening attempts to engage all the senses, the total organism, and achieve total response in the face of traditional arts which focus on narrower inlets of sensation.

Multi-medias are invariably sad comedies. They work as a kind of colorful group therapy, a woeful mating of actors and viewers, a mutual semi-masturbation. The performers seem to need their audience and the spectators- the spectators would find these same mild titillations in a freak show of Fun Fair and fancier, more complete amusements in a Mexican cathouse.

Films are collections of dead pictures which are given artificial insemination.

It is wrong to assume that art needs the spectator in order to be. The films runs on without any eyes. The spectator cannot exist without it. It insures his existence.

The city forms,- often physically, but inevitably psychically- a circle. A game. A ring of death with sex as its center. Drive toward outskirts of city suburbs. At the edge discover zones of sophisticated vice and boredom, child prostitution. But in the grimy ring immediately surrounding the daylight business district exists the only real crowd life of our mound, the only street life, night life. Diseased specimens in dollar hotels, low boarding houses, bars, pawn shops, burlesques and brothels, in dying arcades which never die, in streets and streets of all-night cinemas.

The Lords appease us with images. They give us books, concerts, galleries, shows, cinemas. Especially the cinemas. Through art they confuse us and blind us to our enslavement. Art adorns our prison walls, keeps us silent and diverted and indifferent.

There are no longer “dancers,” the possessed. The cleavage of men into actor and spectators is the central fact of our time. We are obsessed with heroes who live for us and whom we punish. If all the radios and televisions were deprived of their sources of power, all books and paintings burned tomorrow, all shows and cinemas closed, all the arts of vicarious existence…